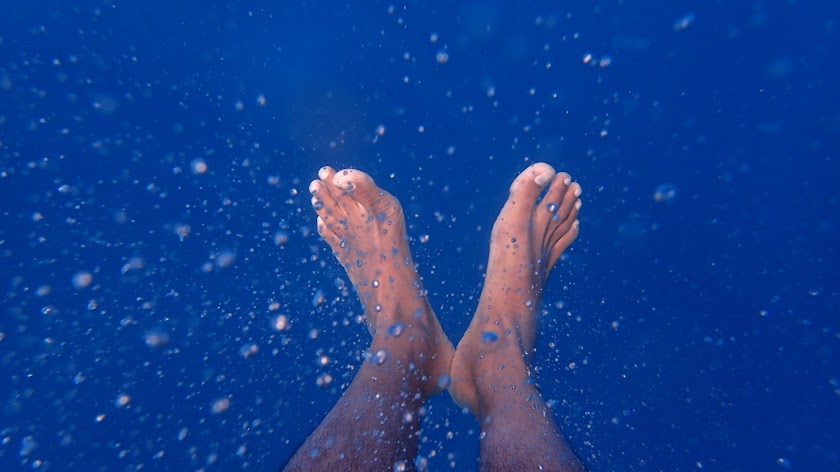 On that day, if I was told that I would be swimming between bays within the week, I would have been only a little more surprised than if I was told that I would soon be flying between hilltops. My longest uninterrupted swim so far had been 50 meters in a swimming pool, and I had struggled to complete that beyond the second lap. In open water, my longest uninterrupted swim was a dozen body lengths.

And yet, just 2 days after 5th July 2015, off the red beach, a sailor on a yacht signaled me to keep my distance. Over the next 4 years I would swim 60km in open water.

Of course, unassisted human flight is a physical impossibility; while swimming is (or masquerades as) a learned skill. But at the time, they both seemed equally out of reach.

I didn’t suddenly learn how to swim - I just forgot to drown.

In fact, once the lungs are completely filled with air, the density of the human body further reduces to 0.945 kg per liter. And since there’s always some air in the lungs, humans should be quite comfortable in water. And yet most humans can’t swim… or think they can’t.

I think this is because most of us don’t differentiate between swimming and non-drowning. The former involves locomotion, and evokes efficiency of movement; the latter involves neither. Non-drowning is just the act of not sinking in water for extended periods of time, however one does it.

There’s actually a word for it - treading water. But this phrase sounds so contrary to its actual meaning, that until recently I thought the phrase described the spell-binding, water-skipping gait 1 of basilisk lizards instead of the awkward convulsions of a non-sinking human.

Ordinarily I don’t prefer using words in the negative while writing non-technical 😬 essays. They seem to me to be a lazy (if efficient) way to describe something. But here, I believe it actually elucidates the context. I’ll explain:

As with locomotion on land, so it is with locomotion in water. The avoidance of drowning should be learnt first. Once one can do that efficiently, they can stay hours in water. If you think that’s incredible, just ask yourself this:

how long can you stand?

Most healthy adults would say hours. If our lives depended on it, we’d probably be able to stay upright with a little shifting until sleep took over (but one should check scientific literature to confirm). If you think about it, standing involves supporting weight and maintaining orientation. Non-drowning involves only maintaining orientation (since we are weightless in water); and it’s quite forgiving with it too, since one only needs to keep their nose or mouth above water while breathing in.

So, theoretically a human should be able to non-drown for longer. I think it’s just that we spend more time learning how to stand.

how long can you walk?

Again, most healthy adults would say hours. Walking is a power-efficient gait, evolved for covering long distances when time is not an immediate constraint. Bio-mechanically it is very different than running - it involves far less power output, it is less demanding on the muscles and more forgiving on the joints.

The word swimming usually evokes the front crawl swim stroke. This is another opposite sounding word, since it’s arguably the fastest swim stroke. Those who are more familiar with swimming might think of other strokes too. But most of these involve efficiency of movement. Most adults don’t walk with competition-level efficiency - they just give them selves some kind of deliberate displacement in the direction they intend to go. And, they can do this for hours.

In water, once one learns how to non-drown, adding locomotion in the intended direction is really easy. Grab some water with your hands and push it in the opposite direction. That’s it. If one is comfortable enough, they can cover a large distance given enough time. Of course, one may do this with much more efficiency, but if one wants to move around in still water, just this much is enough.

We need a word to describe the water equivalent of the land-walk. I am going to call this shuffling for now. It evokes inefficiency, movement and walking; so it resembles what I want to describe. I would have called it whuffling (for water-shuffling), but I have a strict one new word per essay policy. 🤷

Most of the 60+km I’ve swum so far was actually shuffling.

On day 2 we took an ATV down to the Black beach (yes, the sand is black). The beach was commercial, with restaurants and paid parasols lining the waterfront. The water wasn’t as agreeable as at Amm...

A few days later, in Crete, we went to the breathtaking Pink Beach alias Elafonisi. The sand is baby pink in many places because of the naturally powdered down shells in them. The water starts off ...

a childhood memory My world was white with mesmerizing cyan stripes. With my eyes being a nose length away from my father’s shirt, it couldn’t be much else. My whole body was vibrating softly and ...